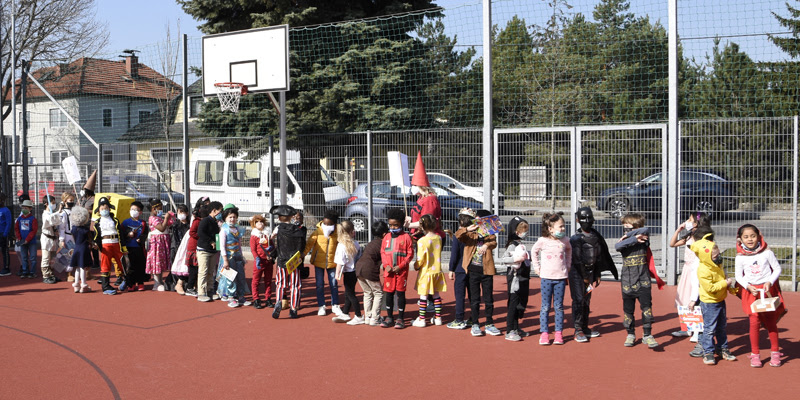 We are heading into Easter Week, one of the holiest weeks of the year for Christians. This is because the death, burial, and resurrection of Jesus Christ are central to the Christian faith. Jesus fulfilled the prophecies demonstrating that He was the Messiah, the Savior of the world. This is a time of reflection about what Jesus truly did by taking our place on the cross. He paid the penalty for sin and death so that we might have a relationship with Him and live!

Today, our elementary students celebrated Book Month with a Character Parade. I had the privilege of leading the parade in my purple crayon costume. Ms. Fitcher had on an amazing costume as the woman who swallowed a fly. She carried a basket that played band marches for us to enjoy while walking all throughout the school. Staff members lined our parade route and cheered as we showed off our costumes. What a wonderful time of celebration!

It reminded me of Jesus’ Triumphal Entry into Jerusalem that we celebrate on Palm Sunday. We remember the palm branches that were laid down as the people shouted, “Hosanna to the Son of David! Blessed is He who has come in the name of the Lord! Hosanna in the highest!” And yet this was right before the people turned on Jesus and yelled out, “Crucify Him!” What a rollercoaster of a week.

In looking back on these events, it might appear that his entrance into Jerusalem with everyone cheering was Jesus’ ultimate victory. On the contrary; it was His death and resurrection where Jesus demonstrated His power over sin and death. He didn’t need a parade for his most amazing victory of them all!

As we enter into this time of lockdown and extended isolation, I encourage you to read all that you can find about Jesus’ death, burial, and resurrection. There are many passages in the New Testament books of Matthew, Mark, Luke, and John. These historical events are not ones that can easily be brushed aside and ignored. Everyone must decide whether they believe whether they actually happened. If they did, as Christians believe, then that changes everything!