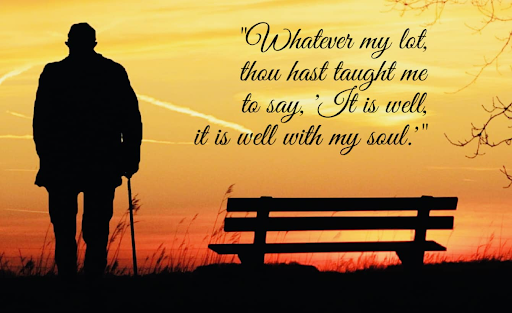 This past has been a week of grieving and rejoicing at the same time. A friend of 40 years passed away after many years of suffering. He went through cancer treatments decades ago, and the treatments made it so that he could no longer eat and barely talk. When we couldn’t understand him anymore, he took to using Facebook to share what was on his mind. When we moved to Vienna eight years ago, we became Facebook buddies.

I learned of his death when his wife of 47 years posted that she had lost her husband and best friend. When I saw that, I went back to see what he had recently posted. I was stunned. The day before he died, he posted 37 times. About five of them were about food. Even though he couldn’t eat, he would post all kinds of recipes with pictures of food. I imagine that was his way of “eating” even without the taste. The other 30 plus posts were about his faith. You see, as his suffering increased, so did his faith in Jesus as his personal Savior.

His posts gave praise to God. He wrote, “This is the day that the Lord has made; let us rejoice and be glad in it.” (Psalm 118:24). Another post said, “Forever thankful; always grateful; abundantly blessed.” As the day progressed, I noticed more and more posts about Heaven. He quoted Elisabeth Elliot, whose young husband had been killed by a tribe in South America where they were living in order to tell them about Jesus. The quote said, “We think we are going from the land of the living to the land of the dying, but if you know Jesus, you are going from the land of the dying to the land of the living.” Then he wrote, “Think of the most beautiful place you know on earth. Think of the most wonderful day you have ever had. Think of the person who loves you more than anybody else loves you. And then multiply that by a million, and maybe that’s the tiniest hint of what Heaven will be like.”

On the day that he passed away, he was in the hospital, so I imagine he knew he was nearing the end. His very last Facebook post on the day he died said in big red letters, “HELL IS NO JOKE. And it’s time we stop downplaying it and start warning people about the consequences of a life without Jesus.” The verses listed were John 3:3-7:16; Romans 3:23, 6:23; John 14:6; Luke 16:19-31; Mark 9:43-49; Matthew 13:42, 25:41; Revelation 20:11-15. I encourage you to look up these verses to see what they say about life after death, Heaven and Hell. There is no greater decision that we must make during our lifetime than whether we believe that Jesus died for our sins and that He is the only way to Heaven.

I began this post by saying that this has been a week for grieving. Those of us who are left will miss our dear friend. But it is also a time for rejoicing, for he is now in the very presence of his Lord and Savior, and he has a new body free from pain. Hallelujah, what a Savior!