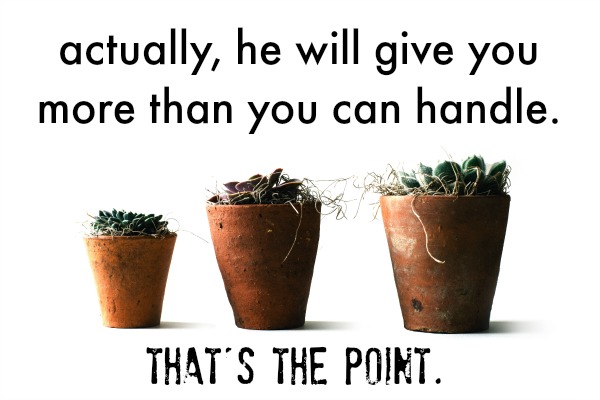 One day I noticed a post from a friend on Facebook. It was the picture that you see above – “Actually, He will give you more than you can handle.” The first comment about it was “My mother always told me that God wouldn’t give me more than I could handle.” So which is it?

Without even knowing it, we interpret what we see and learn through our own cultural lens. In the United States, and especially in the northeast where I grew up, independence and self-sufficiency are qualities that are valued. So, when we read a verse like John 15:5 that says, “apart from me you can do nothing,” we tend to manipulate it to fit with what we already believe. We change it to be a half-truth. It’s kind of like, “God helps those who help themselves.” Did you think that this is in the Bible? No, it isn’t. Again, this is the very opposite of what the Bible says. In Romans 5:8, the Apostle Paul reminds us that it was “While we were still sinners, Christ died for us.” Not while we were doing our best or helping ourselves. This is the ultimate example of God’s undeserved love and grace.

So, what about God giving us more than we can handle? If that is true, it sure doesn’t sound fair. Again, the Apostle Paul wrote to the Christians in Corinth saying, “We were under great pressure, far beyond our ability to endure, so that we despaired of life itself. Indeed, we felt we had received the sentence of death. But this happened that we might not rely on ourselves but on God, who raises the dead.” Paul says that his troubles were so extreme and far beyond our ability to endure, that he thought he would die. This isn’t a man saying, “I’ve got this.” This is someone who couldn’t do what he was being called to do alone. But Paul knew that God was with him and that God who was able to raise Jesus Christ from the dead was in control of the situation. Paul may not have understood or even liked everything that was happening to him, but he had faith in God who has a perfect plan.

So, does God give us more than we can handle? He sure does! Why? So that His power can be seen at work in us and to grow us to become more like His Son, Jesus Christ. Again, the Apostle Paul wrote to the church in Corinth telling them that He begged God to take away what he calls “a thorn in my flesh” and God responded with “‘My grace is sufficient for you, for my power is made perfect in weakness.’ Therefore I will boast all the more gladly about my weaknesses, so that Christ’s power may rest on me. That is why, for Christ’s sake, I delight in weaknesses, in insults, in hardships, in persecutions, in difficulties. For when I am weak, then I am strong.”

Trusting God isn’t easy. But the more we get to know Him, the more we can trust Him, realizing that He has the ultimate good in mind. So even if we don’t always understand the circumstances of our lives, we can place our trust in the Almighty, Sovereign God who loves us more than we could ever imagine. That’s the point!